Page 1 of 1
Spread the love
Nigerian security forces are carrying out extrajudicial killings in Oyigbo, say residents of the town in southern Rivers state.

They accuse the army of carrying out revenge killings after authorities said three policemen and six soldiers were killed by members of a proscribed separatist group.

Amnesty International also said it had received reports that “soldiers are allegedly invading homes” and that “some residents reported seeing dead bodies on the street, allegedly shot by soldiers”.

Monday Bakor, 36, told BBC Igbo that police officers shot dead his fiancée Queen Nwazuo on 22 October while they were both locking up their barbing salon.

“I saw the policeman wearing [a] red beret. Before I could know, I heard a very loud sound, not in the air, directly at the shop. The bullet pierced through the iron door and hit her,” he said.

“I rushed her to a hospital where she was confirmed dead,” he added.

Police spokesman Nnamdi Omoni told the BBC that no report had been made of the incident.

Mr Bakor said he could not do this because of a 24-hour curfew in the area and pointed out the closest police stations had been burnt down.

What is the trouble about?

Authorities say members of the Indigenous People of Biafra – Ipob, proscribed as a terrorist organisation in 2017 by Nigeria’s federal government – targeted security operatives in Oyigbo as tensions spilled over following the #EndSars protests against police brutality in the country. 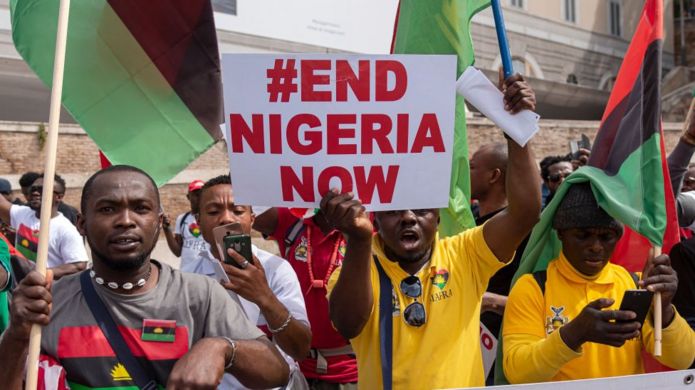 Ipob is seeking independence for Igbo-speaking parts of south-eastern Nigeria. A civil war in the area from 1967-70 caused the deaths of about a million people.

Oyigbo is a known Ipob stronghold.

Two police stations and a hospital in the area were burned on 21 October as widespread mayhem erupted after protesters against police brutality were shot at the Lekki toll gate in Lagos .

Clashes with the army in Abia state spilled over into the neighbouring Oyigbo town in Rivers state.

What does the government say?

Rivers state Governor Nyesom Wike imposed a 24-hour curfew on 23 October in Oyigbo as the violence threatened to spiral out of control but said on Monday that soldiers had not been killing people in the area.

“It is not correct that soldiers are going from house to house to kill.

“When the Ipob killed the Army officers, they took their guns. It is normal for them [army] to recover those guns. In any case, there are consequences when soldiers are killed,” Mr Wike said on Monday.

The governor last month banned demonstrations in the state on the eve of a peaceful #EndSars protest but protesters defied him, marching to government house in the state capital, Port Harcourt, and forcing him out to address them. 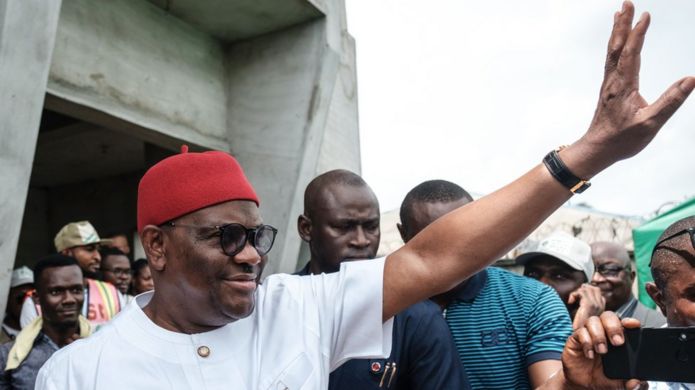 “This is clearly a terrorist group which existence, creed, mission and activities are strongly denounced even by the government and peoples of South-Eastern States of the country,” he said.

“People have been spreading information based on their interests but when you investigate you find out it’s not true,” he told government-owned Radio Nigeria.

What is the latest?

Civil society groups in the state have asked the governor to lift the curfew to enable residents to access supplies and other provisions.

One resident, Bani Jackreece, told the BBC’s Karina Igonikon that it was proving difficult to get essential supplies.

“There was no way to go buy food or withdraw money and everywhere is locked-down with security patrol and they were chasing people to get inside if they came out,” she said.
https://www.bbc.co.uk/news/amp/world-africa-54791650?__twitter_impression=true