Accusations of sexual harassment have trailed Timi Adigun, the coordinator of MINE Teenage Ministry and pastor at The Ark Church, a Lagos-based worship centre.

Mr Adigun, 35, is also the editor of MINE Magazine – a free Christian teenage magazine that preaches sexual purity.

Earlier on Thursday, several posts surfaced online accusing Mr Adigun of sexcapades with teenage girls under his mentorship and tutelage.

Akan Imoh, a public relations expert, who lives close to the church in Lagos, claimed that he confirmed the allegations after investigating alongside two other journalists.

In the Facebook post that went viral, he also claimed Mr Adigun was nonchalant about their findings.

“So, when I started hearing the rumours, I took steps to investigate. I had meetings with some of the top leaders in the ministry. I joined hands with two other journalists and we investigated the matter. We spoke with everyone who mattered, even up to the former pastors. Everyone confirmed the story. They were even urging us to go ahead and publish. We even created a Google form for former members to register their displeasure. You need to see the anger on that form.

”The very annoying thing is that this man doesn’t seem like he cares. He just wants to move on. The last I heard is that he has started another church/ministry. Something called ‘Haven of Love’. Actually, MINE Teens Ministry was closed without any proper explanation. The church was also closed too.

”You just throw teenagers into confusion. There’s too much anger on the streets. These guys have been hitting up my DM, and I wasn’t even a leader or a member of the ministry. They are confused and angry. Can you imagine, you’ve been telling these kids not to have sex till they get married, but then, you’ve been doing stuff with them in secret,”

Commenting on the level of trust in Mr Adigun, Mr Imoh recalled a scenario that happened when he was still an executive in another teenage church.

Mr Imoh said he and another teen leader went to see the mum of a girl who they were trying to bring to church but was met with a cold reaction.

Quote
“The mum looked at us and shook her head saying we were young boys, and she can’t release her daughter to us. She asked us if we had heard of Timi Adigun and MINE Teens Ministry. That’s the only church she can allow her daughter to go to. Well, we sha carried our legs and left. Because she was right. We were just young boys. Who would want to leave their daughters with us. But look at where it ended. The place parents trusted.”

He, however, called out the clergyman, demanding explanations from him and intervention of leaders of the Christian community.

“What we are asking for is simple. We want Timi Adigun to come out and give an explanation. He can’t keep silent. See, to be honest, if you people know the respect I have for him ehn. I’m so willing to forgive him. That’s me, who’s not even a core member. Now, imagine, those who are his followers gan gan. All we want is for him to explain to us. Are these things true or not? Why was the church closed down?”
Quote
“If these things are true. These are what we want:– An admission of guilt — Public steps to change — Therapy/Counselling for the girls involved — Handover of the church leadership,”

Several Nigerians have also clamoured that Mr Adigun responds to the allegation. 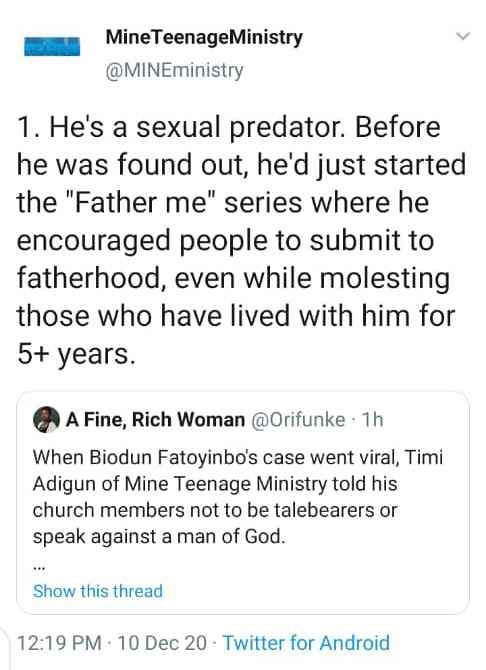 A journalist, Omon Okhuevbie, said she found out that Mr Adigun has been having “consensual” sex with teenagers and ladies in the church.

Quote
“A popular teenage/youth ministry (MINE ministry) known for their “Sexual Purity/World Virginity Day”, I found out that the pastor has been having consensual sexual affairs with teenagers and ladies in the church. Different girls, not just one o! Wahala!”

“It’s this level of pride and audacity to still plan to lead another church for me. To what end? To hurt them again? Pastor Timilehin Adigun has been harassing so many girls in his ministry and church in the past 5 years— a lot of people even say it is beyond 5 years,” Abayomi Adeola, a Business Coach wrote on Twitter.

Rather than respond to the allegations, Mr Adigun, through his wife, Titi Adigun, cancelled some programmes and suspended the MINE Teenage Ministry’s activities indefinitely.

Quote
“A lot is happening in this ministry presently as you might have gathered. Pastor Timi and I apologise for everything said and done wrong. Please forgive us. In line with this, The MINE Nation’s Activities are put on hold indefinitely, for now. Worship Fiesta 2020 is cancelled. The MEET 2020 is cancelled. The Ark Church would have her last service on Sunday,”

she wrote on the church’s WhatsApp platform via her number.

Mr Adigun and his wife’s telephones have not been reachable since Thursday afternoon when our reporter tried the phone numbers repeatedly.

A close associate of Mr Adigun, who asked not to be named, said he had changed his known number when the allegations became public knowledge.

Quote
“He changed his number when this sexual harassment case started,”

Church reacts
In a thread posted via its Twitter account, MINE Teenage Ministry confirmed the allegations against its coordinator.

Quote
“He’s a sexual predator. Before he was found out, he’d just started the “Father me” series where he encouraged people to submit to fatherhood, even while molesting those who have lived with him for 5+ years,”

In subsequent tweets, which were not deleted, the group said Mr Adigun’s defence, when quizzed, was that the girls also enjoyed the acts, and no one loves the girls as much as he does.

When asked to take a break, the organisation claimed, he remarked that he has been doing it for years and no one knew, so why would he stop preaching now when people still get saved despite his acts!

Quote
“Together with his wife, Timilehin Adigun has instead taken to Instagram to do giveaways and creating a positive image of himself, not even a month from when the story broke out of his many excesses,”