German Chancellor Angela Merkel has stepped down after 16 years in power, as the German parliament elects Olaf Scholz as the next leader of Europe’s biggest economy.

Merkel formally handed over the reins to her successor on Wednesday afternoon, in a bittersweet goodbye. 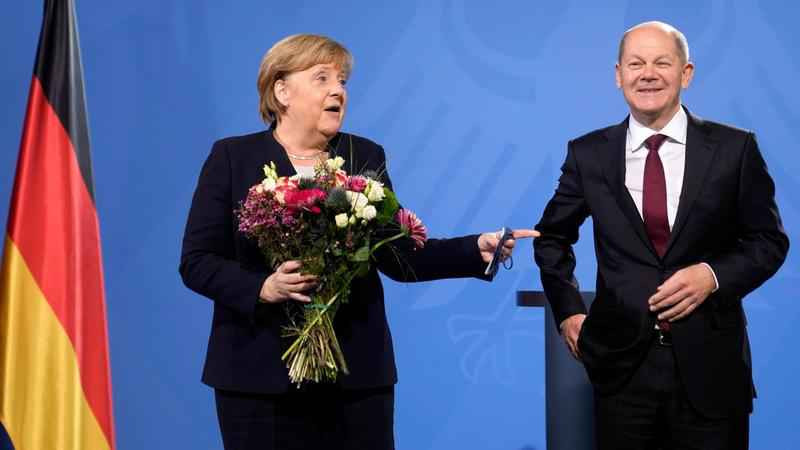 “It will be a new beginning for our country. In any case, I will do everything to work towards that,” the 63-year-old said as he took his oath of office in an official handover ceremony in the Berlin parliament.

Scholz was elected chancellor after a secret ballot in which he won 395 out of 707 German lawmakers’ votes. Scholz will lead Germany’s first federal “traffic light” coalition, made up of the SPD, the ecologist Greens, and the liberal Free Democrats (FDP), and named for the parties’ colours.

Scholz will head a three-way governing coalition consisting of the social democrat SPD party, the Greens and the liberal FDP.

The SPD-Greens-FDP coalition sealed a pact, titled “Dare for More Progress” last month that pledged “a new beginning for Germany”.

“I know you are starting work highly motivated,” Merkel told Scholz at her chancellery in Berlin, adding: “take this office and work in the best interest of our country—that is my wish.”

“We will write the next chapter together. For the French, for the Germans, for the Europeans,” said Macron in a tweet in French and German. He also thanked Merkel for “never forgetting the lessons of history, for doing so much for us, with us, to move Europe forwards”.

European Commission President Ursula von der Leyen congratulated Scholz and said she looked forward to working with him for a stronger EU.

“Congratulations, dear Olaf Scholz on your election and appointment as federal chancellor. I wish you a good start and look forward to further trusting cooperation for a strong Europe,” she tweeted in her native German.

“We are counting on continuity, on the fact that constructive relations will develop between the president and the new chancellor, that the German side will continue to proceed from the understanding that there is no alternative to dialogue to resolve the most difficult differences,” Kremlin spokesman Dmitry Peskov told reporters.

Merkel, 67, Germany’s first woman chancellor, is retiring from politics after four consecutive terms, the first post-war leader to step aside of her own accord.

Sri Lanka Citizens Take Over President’s Residence After Overthrowing Him

Barack And Michelle Obama Issue Powerful Statements As History Is Made On Women’s Rights To Abortion In U.S

Husband kills Himself, Wife And Their 3 Daughters After Faking Covid Vaccine Certificate
Man Sparks Outrage After Making A Young Street Beggar Kiss Him Before Helping Her
Comment