Another Catholic Priest has been kidnapped by bandits in Kaduna.

Reverend Father Emmanuel Silas of the St. Charles Catholic Church, Zambina, in the Kauru Local Government Area of Kaduna State, was abducted in the early hours of Monday, July 4.

The Chancellor, in a statement released in Kaduna on Monday July 4, said the priest was abducted from the parish rectory of the church in the early hours of today.

Fr. Okolo said: “It is with great pain that we announce to you the kidnapping of our Priest, Rev. Fr. Emmanuel Silas. The event occurred in the early hours of July 04, 2022, when he could not turn up for morning Mass.

“He was abducted from the parish rectory at St. Charles Catholic Church, Zambina, in the Kauru Local Government Area of Kaduna State.

“We solicit an intense prayer for his quick and safe release. We equally wish to call on all and sundry to refrain from taking the laws into their hands.

“We will use every legitimate means to ensure his quick and safe release.

“May Jesus crucified on the Cross, listen to our prayers and hasten the unconditional release of His Priest and all other kidnapped persons.” 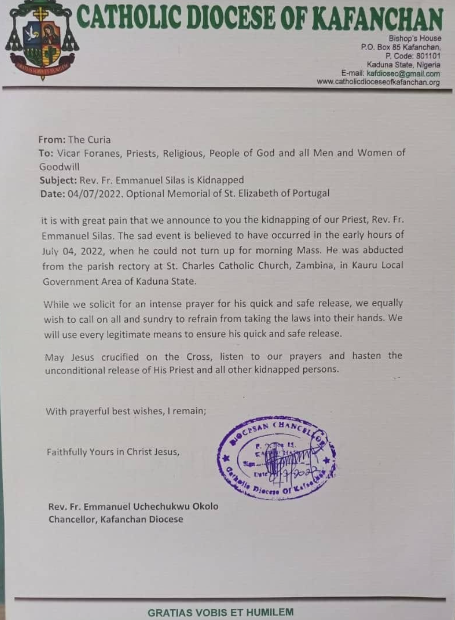 This is coming less than a week after Reverend Father Vitus Borogo, also a Catholic priest, was buried.

Borogo was killed on June 25, 2022, on his farm while his brother, CY Borogo, was kidnapped.

Man Kills Creditor To Avoid Refund Of Loan In Oyo